The Parody Wiki
Register
Don't have an account?
Sign In
Advertisement
in: Characters, Animals, North American Animals,
and 64 more

The Arctic tern (Sterna paradisaea) is a long-distance migrant, making a staggering annual round-trip from its Arctic or northern temperate breeding range to the Antarctic where it spends winter. This is probably the longest migration undertaken by any bird and means that the Arctic tern sees more sunlight each year than any other animal, as they experience a 'second summer' by travelling south in winter. They are very similar in appearance to the common tern (Sterna hirundo), so much so that birdwatchers call unidentified terns 'commic terns', an amalgamation of the two common names. Arctic terns are slightly smaller than common terns, and have a shorter bill and longer tail. The rump is white, the underparts are darker and the wing lacks the dark wedge on the outer edge, which is a key identifying feature of common terns . During summer, the bill becomes bright red and lacks the black tip seen in common terns. Long tail streamers also develop in summer. A kee-arr' alarm call and a piping pi-pi-pi-pi-pi' call are produced. 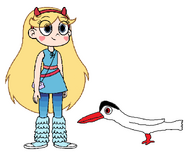 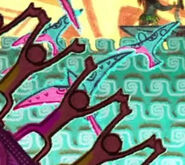