Argentinosaurus (meaning "Argentine lizard") is a genus of titanosaur sauropod dinosaur first discovered by Guillermo Heredia in Argentina. The generic name refers to the country in which it was discovered. The dinosaur lived on the then-island continent of South America somewhere between 94 and 97 million years ago, during the Late Cretaceous Period. It is among the largest known dinosaurs, The type species of Argentinosaurus, A. huinculensis, was described and published in 1993 by the Argentine palaeontologists José F. Bonaparte and Rodolfo Coria. Its more specific time-frame within the Cretaceous is the late Cenomanian faunal stage, ~96 to 94 million years ago. The fossil discovery site is in the Huincul Formation of the Río Limay Subgroup in Neuquén Province, Argentina (the Huincul Formation was a member of the Río Limay Formation according to the naming of the time).

Argentinosaurus herd in Chased by Dinosaurs. 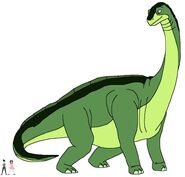 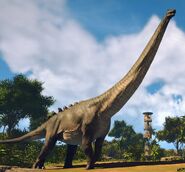 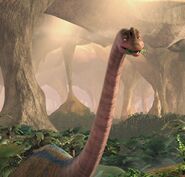