Start a Wiki
Armor King (アーマー・キング Āmā Kingu) is a title that two characters have taken in the Tekken series. Even though there have been two characters who have taken the name, each is simply called Armor King in their respective games, though a numerical value is sometimes given to them to separate them as different characters, similar to King. 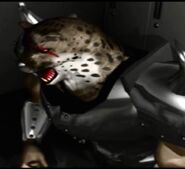 Tekken 2 (1995)
Add a photo to this gallery
Retrieved from "https://parody.fandom.com/wiki/Armor_King?oldid=1797348"
Community content is available under CC-BY-SA unless otherwise noted.