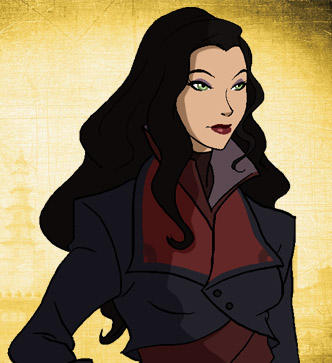 Asami Sato is the beautiful daughter of Hiroshi Sato and a main character in Avatar: The Legend of Korra. Though her father is in league with the Equalists, she recognized that his actions were wrong and chose to stand against him. She was in a love triangle with Mako and Korra, and was forced to watch as her boyfriend ran off after another woman. Following her father's imprisonment, Asami took over Future Industries. She remains good friends with Korra despite their both loving the same man and is generally very polite and sweet despite both her wealthy background and being the daughter of an Equalist.

She can't bend, but she knows how to fight using hand to hand combat, and also using an electrified glove taken from her father. She is also an excellent driver, capable of piloting anything from a moped to a satomobile to a biplane.

Retrieved from "https://parody.fandom.com/wiki/Asami_Sato?oldid=346023"
Community content is available under CC-BY-SA unless otherwise noted.