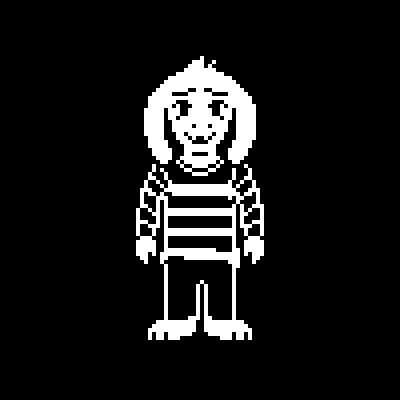 Asriel Dreemurr is a major character and secret main antagonist in the 2015 indie video game Undertale.  He is a male goat child, and the true form of Flowey, of whom he became after his untimely death.  He only appears at the end of the Pacifist route as the final boss to fight, never appears during neutral, and his face-only appears in Genocide.  He is truly a tragic villain, who was only turned evil and selfish due to his soul being taken away when he was reincarnated as a flower, the source of his feelings.  He is voiceless in-game, but the noises made when he speaks are high and quiet.

Asriel Dreemurr is a small, male, white anthro goat with dark eyes, a small nose, and little fangs, along with thin eyebrows.  He's quite short and slender, with white small hands and big paws for feet.  He wears a green and yellow striped shirt along with green pants, and goes barefoot.  He's got a small tuft of fur on the top of his head as well, and floppy ears.

Asriel, when in his normal form, is very shy, sweet, kind, and innocent.  He's described as docile, loving, and unadventurous.  However, after his transformation into Flowey, due to his lack of soul, containing his love and compassion for others, he becomes spiteful, mean, self-centered, hateful, arrogant, and psychotic, and acts very similar to this in his god form, yet more arrogant than before due to his power.  However, as the player, Frisk, and other monsters help him remember who he truly is, his feelings come back to him and he breaks down sobbing, showing signs of being a crybaby before.  He is very kind to Frisk afterwards, and sacrifices his life to save the underground twice.

Retrieved from "https://parody.fandom.com/wiki/Asriel_Dreemurr?oldid=1748227"
Community content is available under CC-BY-SA unless otherwise noted.