One of the largest of the tunas, the Atlantic bluefin tuna (Thunnus thynnus) has been called a ‘pinnacle of fish evolution’, referring to its remarkable swimming ability. Its body, shimmering deep metallic blue above and silvery white on the underside, is well adapted for a life wandering the vast oceans. It is deep bodied, but flattened from side to side, and tapers to a point before the sickle-shaped tail fin, which can power the tuna with ease through the water. Colourless lines and rows of dots may be visible on the lower sides and belly. The Atlantic bluefin tuna has two dorsal fins; the first may be yellow or blue, while the second, taller dorsal fin, is reddish-brow. The second dorsal fin is followed by seven to ten yellow finlets, edged with black, which run down the back toward the tail. 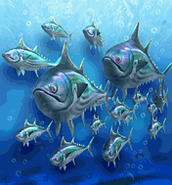 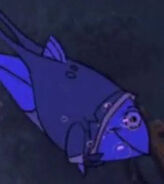