The Parody Wiki
Register
Don't have an account?
Sign In
Advertisement
in: Animals, Fishes, Ocean Animals,
and 36 more

The Atlantic herring (Clupea harengus) is a herring in the family Clupeidae. It is one of the most abundant fish species in the world. Atlantic herrings can be found on both sides of the Atlantic Ocean, congregating in large schools. They can grow up to 45 centimeters (18 in) in length and weigh up to 1.1 kilograms (2.4 lb). They feed on copepods, krill and small fish, while their natural predators are seals, whales, cod and other larger fish. The Atlantic herring fishery has long been an important part of the economy of New England and the Canadian Maritime provinces. This is because the fish congregate relatively near to the coast in massive schools, notably in the cold waters of the semi-enclosed Gulf of Maine and Gulf of St. Lawrence. North Atlantic herring schools have been measured up to 4 cubic kilometers (0.96 cu mi) in size, containing an estimated 4 billion fish. 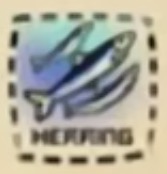 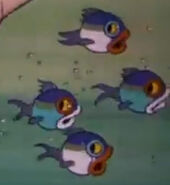 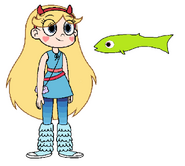