The Parody Wiki
Register
Don't have an account?
Sign In
Advertisement
in: Characters, Animals, Fishes,
and 34 more

The Atlantic salmon (Salmo salar) is a species of ray-finned fish in the family Salmonidae. It is found in the northern Atlantic Ocean, in rivers that flow into the north Atlantic and, due to human introduction, in the north Pacific Ocean. Atlantic salmon have long been the target of recreational and commercial fishing, and this, as well as habitat destruction, has reduced their numbers significantly; the species is the subject of conservation efforts in several countries. 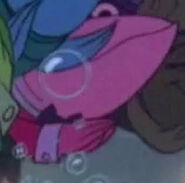