The Atlantic tarpon (Megalops atlanticus) inhabits coastal waters, estuaries, lagoons, and rivers. Tarpons feed almost exclusively on schooling fish and occasionally crabs. A tarpon is capable of filling its swim bladder with air, like a primitive lung. This gives the tarpon a predatory advantage when oxygen levels in the water are low. Tarpons have been recorded at up to 2.5 m (8 ft 2 in) in length and weighing up to 161 kg (355 lb). The Atlantic tarpon is also known as the silver king. 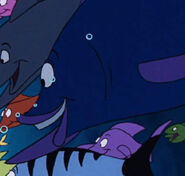