Augustus Gloop is the fat German boy in Roald Dahl's Charlie and the Chocolate Factory.

Allies: His mother and father, the other Golden Ticket winners

Enemies: The other Golden Ticket winners (formerly), Willy Wonka, and the Oompa Loompas

Likes: Food (especially chocolate and sausages), cats, being with his parents, singing

Dislikes: Getting stuck in tight spots, running out of food, being called names

He is a stuffed teddy bear

As played by Philip Wiegratz 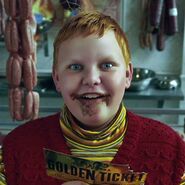 Excited to eat all the chocolate in the factory

As played by Michael Bollner

Eating at a classy Bavarian restaurant

In the original book, with his mother

In the new West End musical
Add a photo to this gallery
Retrieved from "https://parody.fandom.com/wiki/Augustus_Gloop?oldid=1609389"
Community content is available under CC-BY-SA unless otherwise noted.