The Parody Wiki
Register
Don't have an account?
Sign In
Advertisement
in: Sofia the First Characters, Characters, Females,
and 26 more

Aunt 'Tilly' Matilda is a character who appears in the Disney Junior animated series Sofia the First, voiced by Bonnie Hunt. She is Sofia's whimsical and adventurous step-aunt and King Roland's older sister who is a Duchess and a brave adventurer.

Being an adventurer, Tilly has seen and done many incredible things, such as riding a giant and teaching a dragon to knit. Aside from her bravery, she is known to be whimsical, always looking on the positive side of things, and whenever there is a problem, she always has a trick or two up her sleeve. During her adventures, she carries an umbrella and a Carpet Bag that is possibly magical because of its ability to hold more items than it should. Nobody but Sofia knows that the true purpose of her many adventures is that she was doing her duty as the Storykeeper, to give stories happy endings.

Tilly has a cape with flower-like crests, a red dress with red-orange buttons, puffed sleeves, a large skirt for the dress and dark brown boots. She has green eyes and blonde hair that's tied in a small ponytail and wears a giant hat tied up with a large red bow. She carries a yellow umbrella and a yellow carpet bag. As a Duchess, she wears a cobalt dress with teal flowers, a tiara, and hair in a bun.

In many ways, Tilly is the complete opposite of her younger brother. Unlike Roland, who judges people and things by appearances and preconceptions to the point of being gullible when it comes to disguises, Tilly knows that appearances can be deceiving as shown when she tells Sofia "Things aren't always what they seem.". She is shown to be quite open-minded. Like Sofia, Tilly loves magic to the point where her knowledge of it far outstrips her brother's and because of this Tilly, unlike Roland, knows how to use magical objects. Unlike Roland, Amber, and James, Tilly also knows how to be self-sufficient.

"But things aren't always as they seem, Sofia."

Thanks for helping me bake it Sofia.

"That is why I never leave home without an umbrella."

Waiting for a kiss

Tilly as a kid 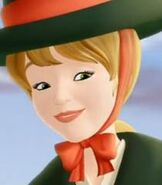