Auntie Shrew is a supporting character in The Secret of NIMH. She is the babysitter for Mrs. Brisby's children, though she is Martin's former arch-enemy and does not seem to like him much because of his impudence, and self-appointed community leader for the animals in the garden. She also used to be jealous of Brisby to an extent. She was voiced by the late Hermoine Baddeley and Doris Roberts in the sequel. 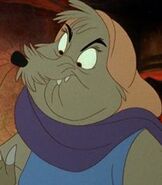 Retrieved from "https://parody.fandom.com/wiki/Auntie_Shrew?oldid=2101148"
Community content is available under CC-BY-SA unless otherwise noted.