The Parody Wiki
Register
Don't have an account?
Sign In
Advertisement
in: Purple Characters, Heroes, The Backyardigans Characters,
and 50 more

Austin ﻿acts as the second tritagonist in the series. He is the new kangaroo on the block, so he doesn't yet know the other kids really well.

He is somewhat hesitant to express his opinions, and slow to take the lead.

When he overcomes his shy feelings, Austin gets the respect he deserves. He is revealed to be sweet and intelligent as the series progresses. Throughout his adventures, he frequently takes the role of a humble servant or faithful assistant, putting his friends' needs ahead of his own and helping them in any way he can. He is not one to ask for recognition, but even so, he receives a lot of love and support from his friends for all that he does for them. 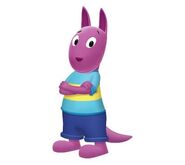