The Parody Wiki
Register
Don't have an account?
Sign In
Advertisement
in: Characters, Animals, Australian Animals,
and 7 more

The Australian king parrot (Alisterus scapularis) is endemic to eastern Australia ranging from Cooktown in Queensland through to Port Campbell in Victoria. Found in humid and heavily forested upland regions of the eastern portion of the continent, including eucalyptus wooded areas in and directly adjacent to subtropical and temperate rainforest. They feed on fruits and seeds gathered from trees or on the ground. The Australian king parrot was first described by the German naturalist Martin Lichtenstein in 1818. Adults of both sexes are about 43 cm (17 in) in length, including the long, broad tail. The adult male has a red head, breast, and lower undersides, with a blue band on the back of the neck between the red above and green on the back, the wings are green and each has a pale green shoulder band, the tail is green, and the rump is blue. The male has a reddish-orange upper mandible with a black tip, a black lower mandible with an orange base, and yellow irises while the plumage of the female is very different from the male having a green head and breast, a grey beak, and the pale shoulder band is small or absent. Juveniles of both sexes have brown irises and a yellowish beak, and otherwise resemble the female. 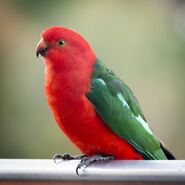 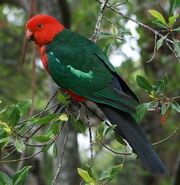 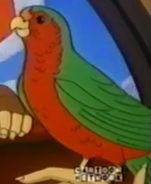 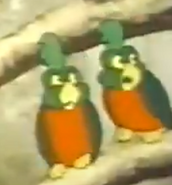