In the Eastern European country of Sokovia, the Avengers – Phineas, Pegasus Seiya, Pikachu, Fluttershy (Saddle Rager), Agent Pinky, and Agent P – raid a Hydra outpost led by Polaris Hilda, who has been experimenting on humans using the scepter previously wielded by Meowth. They encounter two of Hilda's experiments – twins Pound Cake, who has super wing power (super speed), and Pumpkin Cake, who can manipulate minds and project energy with her magic – and apprehend Hilda, while Phineas retrieves Meowth's scepter.

Phineas and Fluttershy discover an artificial intelligence within the scepter's gem, and secretly use it to complete Phineas's "Sweetie Bot" global defense program. The unexpectedly sentient Sweetie Bot, believing he must eradicate humanity to save Earth, eliminates Phineas's A.I, Princess Luna, and attacks the Avengers at their headquarters. Escaping with the scepter, Sweetie Bot uses the resources in Hilda's Sokovia base to upgrade his rudimentary body and build an army of robot drones. Having killed Hilda, he recruits the Cakes, who hold Phineas responsible for their parents' deaths by his weapons. Together, they go to the base of arms dealer Scar in an African shipyard to obtain Pride Lands vibranium. The Avengers pursue them, but Pumpkin subdues the heroes with haunting visions, causing the Saddle Rager to rampage until Phineas stops him with his Saddlebuster Armor

A worldwide backlash over the resulting destruction, and the fears Pumpkin's hallucinations incited, send the team into hiding at Perry's safehouse. Pikachu departs to consult with Ash Ketchum on the meaning of the apocalyptic future he saw in his hallucination, while Chris Redfield arrives and encourages the team to form a plan to stop Sweetie Bot. In Seoul, Sweetie Bot forces the team's friend Candace to use her synthetic-tissue technology, together with vibranium and the scepter's gem, to perfect a new body for him. As Sweetie Bot uploads himself into the body, Pumpkin is able to read his mind; discovering his plan for human extinction, the Cakes turn on Sweetie Bot. Seiya, Pinky, and Perry find Sweetie Bot and retrieve the synthetic body, but Sweetie bot captures Pinky.

The Avengers fight amongst themselves when Phineas secretly uploads Princess Luna – who is still operational after hiding from Sweetie Bot inside the Internet – into the synthetic body. Pikachu returns to help activate the body, explaining that the gem on its helmet – one of the six Infinity Stones, the most powerful objects in existence – was part of his nightmare. This "Nightmare" and the Cakes accompany the Avengers to Sokovia, where Sweetie Bot has used the remaining vibranium to build a machine to lift a large part of the capital city skyward, intending to crash it into the ground to cause global extinction. Fluttershy rescues Agent Pinky, who awakens Saddle Rager for the battle. The Avengers fight Sweetie Bot's army while Chris arrives in a Helicarrier with Jill Valentine, Ferb and S.H.I.E.L.D. agents to evacuate civilians. Pound dies when he shields Perry from gunfire, and a vengeful Pound abandons her post to destroy Sweetie Bot's primary body, which allows one of his drones to activate the machine. The city plummets, but Phineas and Pikachu overload the machine and shatter the landmass. In the aftermath, Saddle Rager, unwilling to endanger Pinky by being with her, departs in a Quinjet, while Nightmare Moon confronts Sweetie Bot's last remaining body.

Later, with the Avengers having established a new base run by Redfield, Valentine, Candace, and Ketchum, Pikachu returns to Asgard to learn more about the forces he suspects have manipulated recent events. As Phineas and Perry also leave, Pegasus and Pinky prepare to train new Avengers: Ferb, Nightmare Moon, Cygnus Hyoga, and Pumpkin.

In a mid-credits scene, Tirek, dissatisfied by the failures of his pawns, dons the infinity gauntlet and vows to personally retrieve the Infinity Stones. 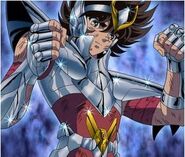 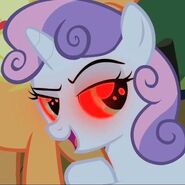 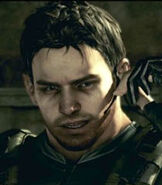 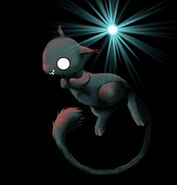 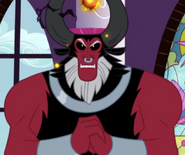 Retrieved from "https://parody.fandom.com/wiki/Avengers:_Age_of_Sweetie_Bot?oldid=1753575"
Community content is available under CC-BY-SA unless otherwise noted.