The Parody Wiki
Register
Don't have an account?
Sign In
Advertisement
in: Characters, Animals, Cretaceous Animals,
and 7 more

Avisaurus (meaning "bird lizard") is a genus of enantiornithine bird from the Late Cretaceous of North America. Two species are known; the type species A. archibaldi and A. gloriae. Both are known only from single fossilized bones of the foot — the tarsometatarsus. Both species of Avisaurus are known from the humid low-lying swamps, lakes, and river basins of the western shore of the Western Interior Seaway, and from the much more arid uplands between that area and the Cordilleran Overthrust Belt which eventually formed the Rocky Mountains. This genus belongs to the enantiornithine family Avisauridae, which also contains similar animals from South America such as Soroavisaurus and Neuquenornis. In the Late Cretaceous the Americas were still separated by a branch of the Tethys Ocean. The presence of reported Avisaurus remains in both North and South America has been put forward as evidence that faunal changes in the southern half of North America during the Lancian resulted from an immigration event of South American taxa moving north. 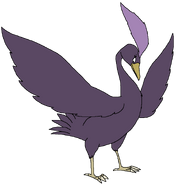 The Good Dinosaur (2015)
Community content is available under CC-BY-SA unless otherwise noted.
Advertisement