Barbara Ann "Babs" Bunny is the lead female in Tiny Toon Adventures. She is a young, extremely cute and unbearably beautiful 14 year old pink and white cottontail rabbit who wears a yellow medium-sleeved blouse, purple knee-length skirt, matching bows on the tips of her ears and frilly white panties (on Fridays only).

She is a space ranger

She is a lion cub

She is a meerkat

She is a hawaii girl

She is a Master Builder

She is a lioness cub

She is a Mouse 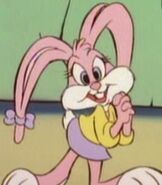 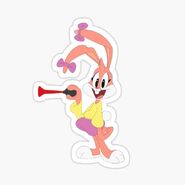 Retrieved from "https://parody.fandom.com/wiki/Babs_Bunny?oldid=2560838"
Community content is available under CC-BY-SA unless otherwise noted.