The Parody Wiki
Register
Don't have an account?
Sign In
Advertisement
in: Yoshipedia, Female Characters, Characters,
and 17 more

Baby Peach is Princess Peach Toadstool as a baby. She made her first appearance in Mario & Luigi: Partners in Time. She does live in the Peach's Castle of the past and is served by Young Toadsworth.

Baby Peach also appeared in Yoshi's Island DS along with other babies like Baby Mario and Baby Donkey Kong. Baby Peach can flutter longer and pick up air currents and ride them.

Baby Peach is younger than Baby Mario and Baby Luigi. She is also very tempermental, and cries often. However, she contains a good heart and perhaps even a logical mind, as she indirectly saved the older Mario brothers from the Shroobs by crying until Baby Bowser saved them in Partners in Time. Baby Peach likes it when Toadsworth acts silly for her. She may also enjoy flight, as she enjoyed it when the adult Mario and Luigi accidently made her carriage float upward. 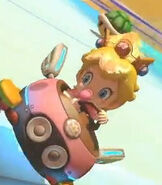 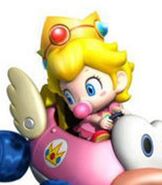 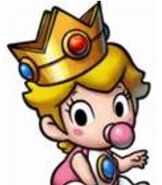 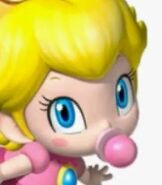 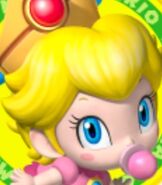 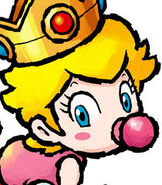