The national bird of Bali, the endemic Bali myna (Leucopsar rothschildi) was described and named as recently as 1910 by English ornithologist Lord Walter Rothschild. The Bali myna is a fairly large myna with mostly white plumage , except for the tips of the short tail and rounded wings which are black. This species has elongated, bristly feathers on the crown and nape which form an erectile crest. A conspicuous patch of bright cobalt-blue skin extends around each eye and tapers to a point. The Bali myna’s legs are greyish-blue, while the heavy bill is grey or brown, fading into a paler yellow or horn colour towards the tip. The eyes are grey, whitish or brown. Male and female Bali mynas are similar in appearance, but the crest is often longer in males. Young birds tend to have a much shorter crest than adults, or may lack one altogether. They may have a smoky tinge to the feathers on the back, and a cinnamon tinge on the wings. The song of the Bali myna is composed of a wide variety of loud, chattering noises, including whistles, chuckles and squawks, and is performed by both sexes, usually without an accompanying display. However, this species is known to perform a bobbing action, which is sometimes accompanied by quieter chattering sounds. The Bali mynaking off, which sounds like ‘creer’, and is also known to utter ‘tschick tschick tschick’ as an alarm call. 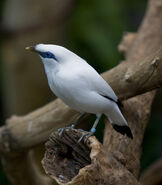 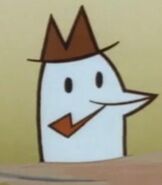