Balto is a wolf-dog hybrid and the main protagonist in Balto.

He is an authoritative asparagus.

Balto plays as Dave the Minion in Awesome Me and Fourscore: Polar's Wild Adventure (Awesome Me 2), alongside Kiara.

He is a lovable and responsible Minion.

He is, well, the president.

Balto plays Ozzie in Over the Hedge (CyberChaseZoneFilms2010 Style)

He is a Possum

He is a Cowboy

He is a Hornbill

He is Aurora's father

He is a gungan

Balto plays Adult Tod in The Wolfdog and the Lion

Balto plays Tonraq in The Legend Of Kate

He is a man from the Southern Water Tribe

He is a who

He is an ape man

Balto plays Fox in The Animals Of Animation Wood

He is a Chinese army captain

He is a canine angel

He is a hedgehog

He is an Incan emperor

He is The King of Thieves

He is Hercules' father

Balto played Tenzin in The Legend of Princess

He is an airbender

Balto played Merlin in The Sword in the Stone (TheLastDisneyToon Style)

He is Prince Phillip's Father

He is a King of England

He is a woodsman

He is a Chinese Dragon

Balto played Big Bird in Sesame Street (CodenameKidsNextDoorZoneFilms2011 Style), Follow That Wolf-Dog and The Adventures of Bambi in Grouchland

He played Freddy Fazbear in the Five Nights at Balto's Series

He is a Bear Animatronic and the mascot of Freddy Fazbear's Pizza.

Balto played The King in Katerella

Balto played Cash from The Alley Cat & The Dalmatian 2

He is a super-soldier.

He is a kitten turned Boy

He is a Boy would never Grow up.

He is a Deformed sausage

He is an Ogre

He is a son of Darth Vader.

Balto Played Henry in Dumbo the Flying Elephant and Friends

He is a big green engine

He is a free House-Elf

He is a Villain of Fix-It Felix

He's a knight who doesn't Wart to be his Squire

He played Khampa in Rock Wolf

He is a Tibetan Mastiff

He is a Elephant

He Played Quasimodo in The Wolfdog Of Notre Dame

He Played Janja Season 3 in The Sponge Guard Remake

He is a leader of the Autobots

The Fox and the Hound: Tod, Copper, Vixey and Chief

All Dogs go to Heaven: Charlie B. Barkin

Spirit: Stallion of the Cimarron Spirit

Friends (Humans and other beings)

Light and Darkness: Gerry Flowertop, Emily Brending and the Band of the Bear

All Dogs go to Heaven: Anne-Marie

The Fox and the Hound: Amos Slade

Strawinsky and the Mysterious House: Globglogabgalab

Charlie B. Barkin (He joins Nick and his crew to stop Chef and her two sidekicks)

Balto has the ability to Change into a Lupinian (Wolf-man) after it was granted to him by Gerry Flowertop.

Weapons: Katana, any sword, any firearm 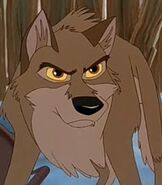 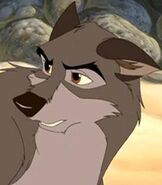 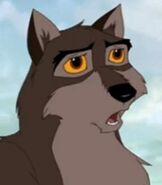 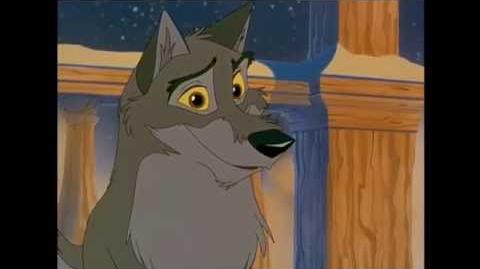 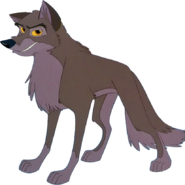 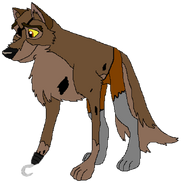 Balto Dressed as Foxy the Pirate 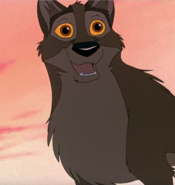 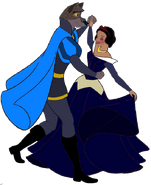 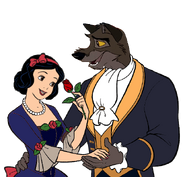 Humphrey, Grey, Balto and Classified
Add a photo to this gallery
Retrieved from "https://parody.fandom.com/wiki/Balto?oldid=2411335"
Community content is available under CC-BY-SA unless otherwise noted.