The Parody Wiki
Register
Don't have an account?
Sign In
Advertisement
in: Digimon Characters, Digimon, Female Characters,
and 10 more

Lillymon is a fairy Digimon who have been styled after the modern Banchō, a particular type of juvenile delinquent. It has a black flower with with a yellow stamen and a cross-shaped scar on its head, and its hair is made from vines. It wears a sailor fuku top, black leather skirt, black boots, and black finger-less gloves on its hands as well as pink bandages on its forearms. It has four purple leaf-like wings on its back under its red Tokkō-fuku. The characters on the Tokkō-fuku read "Peerless" (天下無敵 Tenkamuteki?) and "Distinguished" (国士無双 Kokushimusou?). It wields a pair of Togemon-themed yo-yos. BanchoLillymon appears to be a homage to Sukeban Deka's Saki Asamiya, who wears a similar outfit and uses a Yoyo in combat. 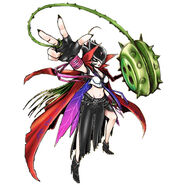 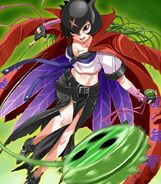