The banded archerfish (Toxotes jaculatrix) is a brackish water perciform fish of the archerfish genus Toxotes. It is silvery in colour and has a dorsal fin towards the posterior end. It has distinctive, semi-triangular markings along its sides. It is best known for its ability to spit a jet of water to "shoot down" prey. Larger specimens may be able to hit prey 2 to 3 metres (6 ft 7 in to 9 ft 10 in) away. The banded archerfish may reach the displaced prey within 50 milliseconds of its hitting the water. The name (binomial as well as common) refers to Sagittarius the archer, because of the unusual method banded archerfish use to capture prey. Banded archerfish are found in Indo-Pacific and Oceanian waters, generally in river mouths and mangrove estuaries. They move between fresh, salt, and brackish water over the course of their lifetime, though not to breed. Because of their markings and silvery colour, banded archerfish are sometimes kept as aquarium fish, though they are difficult to care for and not recommended for most home aquaria. 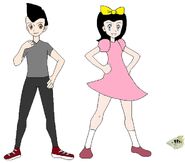 Add a photo to this gallery
Retrieved from "https://parody.fandom.com/wiki/Banded_Archerfish?oldid=2619577"
Community content is available under CC-BY-SA unless otherwise noted.