The Parody Wiki
Register
Don't have an account?
Sign In
Advertisement
in: Characters, Animals, Ocean Animals,
and 50 more

The banded sea krait (Laticauda colubrina), also known as the yellow-lipped sea krait or colubrine sea krait, is an amphibious species of snake that spends most of its life at sea but comes to land to reproduce. In adaptation to this curious semi-aquatic lifestyle, the banded sea krait has evolved unusual morphology. It has retained the ventral scales and cylindrical body shape that is typical of terrestrial snakes, as this helps with climbing on land and in low trees, but its tail is paddle-shaped, which allows rapid movement in water. It also has large lungs so that it can spend long periods under water, as well as valved nostrils that keep out saltwater while diving, and glands under the tongue that expel excess salt. The banded sea krait displays marked sexual dimorphism, the female being heavier and around a third longer than the male. The head and tail look rather similar, which perhaps serves to confuse predators by drawing their attack to the tail, which is less likely to result in fatal injuries. The small head is slightly distinct from the body, which is bluish-grey with smooth, regularly-spaced scales. Equal-sized black bands circle the entire length of the body and contrast sharply with the yellow or cream underparts. The snout, upper lips and a bar above the eyes are yellow, but the remainder of the head is black. 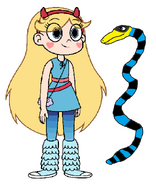 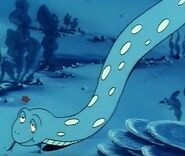 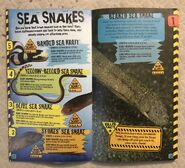