The Parody Wiki
Register
Don't have an account?
Sign In
Advertisement
in: Characters, Animals, Asian Animals,
and 20 more

An unmistakeable species, the Bar-headed goose (Anser indicus) is a medium to large, pale grey goose with a striking black and white pattern on its head for which it gets its common name. The head of the bar-headed goose is mostly white, but is clearly marked with two horizontal dark stripes, the upper of which is broad and runs round the back of the head from eye to eye. The lower stripe circles the lowernape and is much narrower. The throat and very top of the bar-headed goose’s neck are whit, while the hindneck is blackish and is separated from the dark grey foreneck by a white, tapering stripe running down each side of the neck. The lower flanks of this species are dar, while the long wings appear almost white when in flight and are tipped with black. The yellow to orange-yellow bill of the bar-headed goose is also black-tipped. This species has brown eyes and yellowish to pale orange legs and feet. Male and female bar-headed geese are similar in appearance, although the male is usually slightly larger. Juveniles are similar in plumage to the adults, but they are generally duller, paler and lack the distinctive horizontal bars on the back of the head. The bill, legs and feet of juvenile bar-headed geese are greenish-yellow and duller than those of the adults. The bar-headed goose produces rather human-like cackling notes, and when in flight it gives the slow, deliberate and somewhat nasal honking calls characteristic of geese. Contact calls consist of between one and three syllables, whereas greeting calls, which are only ever given between family members, comprise up to five syllables. Interestingly, the bar-headed goose utters two different warning notes, one which is given when a bird of prey is nearby, and another for when land predators are close. Trilled calls are used to indicate that a bird is sleepy, and in defensive situations the bar-headed goose hisses. The bar-headed goose is able to migrate at altitudes of up to 10,000 metres over the Himalayas. A native of central and southern Asia, the bar-headed goose may become an invasive species across much of Europe should its population size in its introduced range reach a critical level. 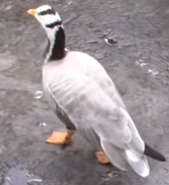