Barbara (Japanese: イバラ Ibara) is a character of the day who appeared in Queen of the Serpentine!. Barbara proved to quiet intimidating as she takes it upon herself to support Lucy. She was angered after Ash had already left for the Battle Pike, so she and her friends couldn't officially welcome him to the facility. She became irritated with Brock after he showed feelings for Lucy, often telling him to keep quiet as he professed his love during the match. Barbara, however, will bow down in respect only to her master, Lucy. Usually Lucy is the one that needs to tell her to watch her temper. Barbara is also overly confident in her master's skills as a Pokémon Trainer as well as her Pokémon. She belittled Jessie's Seviper saying that Lucy's Seviper was way better than hers. While during Ash's match, Barbara was in the sidelines cheering on Queen Lucy and pointed out Ash's flawed battle strategies. Ash emerged victorious and won himself the Luck Symbol, though Barbara was disappointed that Lucy didn't win. The dub states Barbara to be Lucy's younger sister, which is probably the misinterpretation of お姉さん Oneesan, the way Lucy's apprentices refer to her), which literally means "elder sister" but is also a polite way to refer to any older young woman. 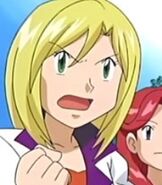