Barbara Millicent Roberts is a fashion doll manufactured by the American toy-company Mattel, Inc. and launched in March 1959. She has gone through many changes throughout the years from her debut in 1959, to now she comes in all varieties

Ruth Handler, after seeing her daughter Barbara assigning her dolls adult roles, wished for a more grown-up doll for children to play with, as most toy dolls during the 1950s were modled after infants. And on a trip to germany with her husband, a co-founder of mattel, she found Bild Lilli Dolls which became the inspiration for Barbie dolls.

The original Barbie doll(1959-1964) came in blonde or brunnette hair and wore a black and white one-piece bathing suit with a ponytail and sunglasses. There were seven variations of this doll, all varying slightly in things such as ponytail style, stand style, and eyeliner color.

In 1961, Barbie also became a registered nurse, wearing an outfit consisting of a dark blue cape with a red interior, a white dress, a nurse's cap with blue stripes, white shoes and a pair of black glasses.

In 1963, Fashion Queen Barbie was released. She was inspired by a popular fashion trend of the 1960s: wigs. She had molded brown hair with a remolvable blue band, and wore a white and gold striped bathing suit and simiarily patterned hat.

In 1964, Swirl Ponytail Barbie, named for her side-sweep(or swirl) bangs was released. This doll also marked a glamor-focused period in barbie's fashion, which lasted for about three years.

Bendable Leg Barbie, or American Girl Barbie as she is known as by collectors (1965-1966) wore various lengths and textures of bobs, and a swimsuit reminiscent of 70's jazzercise outfits.

In 1965, Barbie became an astronaut. This time period had a great focus on space and NASA's advancements, with the first moonwalk happening in 1969.

In 1966, Color Magic Barbie was released. She came with either Golden Blonde or Midnight Black hair, which when an enclosed solution was applied, would turn into either Scarlet Flame or Ruby Red. Her outfit colors would also change as a result of this solution.

In 1967, twist 'n turn barbie was released(1967-1868). this barbie was the end of the glamor era, and the start of the mod era. She featured a different face, hairstyle, and body compared to older barbies.She also had rooted eyelashes, and bendable legs, and could be twisted at the waist.

In 1968, Talking Barbie was released(1968-1971). There were three different versions of this doll, along with a version that had Stacey's face.

Dramatic New Living Barbie was released in 1970. She had bendable joints, and swiveled at her waist, neck, legs, arms, and hands.

in 1971, Growin' Pretty Hair Barbie was released(1971-1972). She had a bun with a retractable ponytail. It also came with two hair pieces, one being small looped braids, adn the other being long ringlets.

In 1971, Living Barbie was released. She was a re-release of the Dramatic New Living Barbie, with different makeup, and a new outfit.

In 1971, Sunset Malibu Barbie was released(1971-1977). She was the iconic Barbie of the 70's, and influenced much of what was released during that decade. She represented the "California girl" look with her tanned skin and blue eyes. She also used Stacey's face instead of Barbie's. She came in a high-neck, light blue swim suit and lavendar glasses.

In 1971, Barbie Hair Happenin was released. She had red hair and came with 3 hair pieces, which were also red.

From 1971 onwards, Barbie dolls were released with centered eyes.

In 1972, Busy Barbie was released. Her hands were molded to hold her accesories, including a suitcase, TV, telephone, glasses, and a tray.

In 1972, Busy Talking Barbie was released. She was the same as Busy Barbie, including accesories, but came with a blonde bob.

In 1972, Walk lively Barbie was released. Using her stand, she woud walk and move her arms.

In 1975, Barbie free moving doll was released(1975-1976).This doll was constructed with a tab on it's back that when pulled allowed the doll to bend and rotate.

In 1975, Gold Medal Barbie was released (1975-1976).She was Sunset Malibu barbie but with a red, white, and blue swimsuit. She was a promotional item for the olympics.

In in 1975,Gold Medal Skater Barbie was released (1975-1976). This doll was also a promotional item for the olympics. This doll also used Sunset Malibu Barbie.

In 1975, Gold Medal Skier Barbie was released(1975-1976). She was also a promotional item for the olympics, and also used Sunset Malibu Barbie.

In 1975, Hawaiin Barbie was released(1975-1984). She used the Steffie head mold, had black hair, and brown eyes.She had many different prints.

In 976, Deluxe Quick Curl Barbie was released. She now came with a Jergens Beauty kit, a Barbie head, a twist waist, and bendable legs.

In 1976, Ballerina Barbie was released. She came with a twist waist a special joints to allow her to do Split kicks.In 1976 and 1979 there were Ballerina Barbie On Tour department store promotions.

In 1976, beautiful Bride is released. She is the last barbie doll to have rooted lashes in the USA until 1992. She was a department store special. Her bride outfit was also avilable seperately.

A Bobblecut doll with the hair color "Titian" 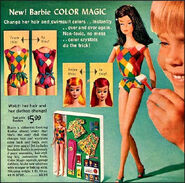 An advertisement for color magic barbie 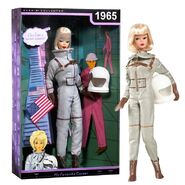 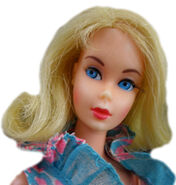 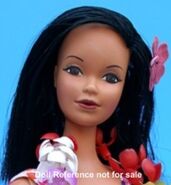 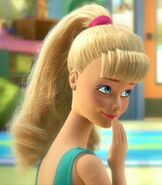 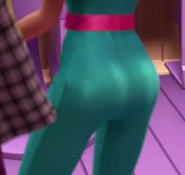 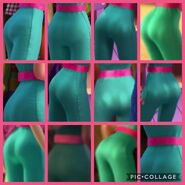