The Parody Wiki
Register
Don't have an account?
Sign In
Advertisement
in: Neutral Characters, Good Characters, Villains Turned To The Good Side,
and 23 more

Bashmaster is a large, muscular, hammer wielding polar bear from Donkey Kong Country: Tropical Freeze. He is the boss of Juicy Jungle and is the fifth and penultimate boss fight of the game overall.

Later he eagerly joined the Great Alliance thanks to Balto's Kindness and Teaching and he shows great pride and Loyalty to King Gerry and his first Friend Balto.

At first he was ill tempered over the loss popsicles started by the Kongs, but he has shown his true, gentle and friendly nature to Balto (As a Lupinian) when he gave him a box of popsicles.

Other than popsicles, Bashmaster has a fond of new dishes and adventure.

Bashmaster has developped a strong friendship with Balto and grew fond of him.

When King Gerry, Queen Emily, Mulan, Kakeru, Bagheera, Wonder Woman and Black Panther arrive in time to Save Balto, they arm themselves to fight against Bashmaster but Balto told them that he meant no harm to him. King Gerry apologised to Bashmaster for thinking that he was a member of Thanos's Empire.

At the Battle of Juicy Jungle, Balto and Bashmaster fought the Snowmads and defeated Lord Frederik, Pompy, Ba-Boom, Skowl, Fugu, Ogthar and Killmonger

Likes: Food (Especially Popsicles), Beer, Balto, Helping others, Being petted, being ridden on the back, his belly being petted, hugs, sleeping, licking hands and cheeks like a dog, belly rubs, Gerry Flowertop, the Great Alliance, Peace

While Balto was sent to the Donkey Kong Universe to defeat the Snowmads led by Lord Frederik under Thanos, and Kylo Ren's Command, Bashmaster was seen laying on his back peacefully licking a purple popsicle, he then hears noises and looks up, Donkey Kong (and a partner if brought along) will be seen flying out of the juicy waterfall, and will drop right on the far left side of the iceberg platform that Bashmaster was on, which cause Bashmaster to accidentally drop his Popsicle right into the juice, Bashmaster attempted to get it back, but a swarm of fish comes up and gobbles up the popsicle, much to both the shock and horror of Bashmaster, he then turns angry at Donkey Kong (and his partner if brought along), who then slightly smile before Bashmaster engaged them in a fight.

After Bashmaster was defeated and was driven out of Juicy Jungle, Balto has made a plan to appease Bashmaster by bringing him a box of popsicles to him.

When Bashmaster threw a fit over the loss of his popsicle, Balto as a Lupinian shown himself up to tell him that there is a surprise for him, Bashmaster looking a bit angry prepared to crush Balto with his hamner and suddenly Balto brought him a crate of popsicles which made him very happy.

Bashmaster started to like Balto because of his kindness towards him, Balto hugged Bashmaster's belly and pets it, Bashmaster licks Balto's cheek like a dog and then Balto and Bashmaster have become friends. 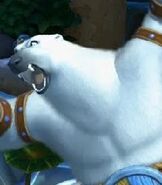