The Parody Wiki
Register
Don't have an account?
Sign In
Advertisement
in: Characters, Animals, Ocean Animals,
and 33 more

The basking shark (Cetorhinus maximus) is the second largest fish in the seas, after the whale shark (Rhincodon typus); its maximum size is thought to be at least 10 metres long. This creature is a gentle giant however, filter-feeding onplankton through the five massive gill slits that almost encircle the head. Thousands of fine, bristle-like ‘gill rakers’ adorn each of the gill arches within the slits. The basking shark has an extremely distinctive body shape with its conical, almost pointed snout and large dorsal and pectoral fins that can reach as long as two metres each, and a crescent-moon shaped tail. The body is a greyish brown colour, either all over or with a paler shade underneath, and is covered with a layer of mucus. The large mouth, which may gape one metre across, contains many small hooked teeth; more than any other shark. The basking shark has a particularly large liver that can weigh up to 25 percent of the body weight and provides buoyancy for its oceanic life. Juveniles have a distinctive hook-like snout, which changes shape during the first year of life. 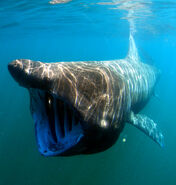