The Parody Wiki
Register
Don't have an account?
Sign In
Advertisement
in: The Fox and the Hound Characters, Black Characters, Bears,
and 25 more

Bear (The Fox And The Hound)

The Bear is the truly main and also the final antagonist of Disney's 1981 film "The Fox and the Hound". He is a giant black-furred bear with red eyes. He only kills intruders, who attempt to enter his territory.

Role in the film:

The Bear first appears while Copper and Amos are trespassing in the woods to find Tod and Vixey, but while trying to get them, they accidentally antagonize the wrathful beast, who awakens and attacks Copper's owner. Amos shoots the bear in the shoulder, but as the shot hits the animal, the bear cries out in pain, when the shot only hurts angers him more when he is hit on the shoulder. The Bear, now really furious, swipes at Amos, causing him to tumble down a hillside, while the beast continues to pursue him. Whilst trying his best to escape from the Bear, Amos is caught in one of his own leghold traps and his shotgun is caught on a tree, slightly out of his reach. Furious that the intruders aren't leaving his territory, the grizzly bear continues to attack them. Copper bravely tries to protect his master and attacks the Bear, but despite being smaller and more agile, he is no match for the giant bear, who swats the dog, and soon leaves poor Copper easily overpowered and beaten up in a very vicious fight. Tod hears Copper's yelping echo and turns and is horrified to see his childhood friend getting nearly killed. Against his better judgement, Tod quickly intervenes to save his friend. As the bear prepares for a final blow on the wounded Copper, Tod leaps onto the bear's back and bites him on the ear to make the bear turn his attention to the fox. Biting and scratching wildly, Tod is able to lure the bear away from Copper and Amos. Eventually, he manages to lure the much larger bear up onto a fallen trunk protruding over a huge waterfall. As Tod hangs for dear life on the trunk, the Bear tries to deliver the final blow, despite that the log cannot support his weight. It breaks, sending the two animals falling down into the huge waterfall hundreds of feet below. Tod survives, while the Bear most likely drowns and/or is driven away by the current. 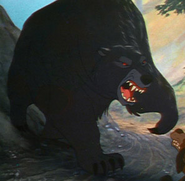