The Parody Wiki
Register
Don't have an account?
Sign In
Advertisement
in: TRON-Universe, Main Characters, Main Heroes,
and 157 more

Beck is the main protagonist of TRON: Uprising. He is voiced by Elijah Wood.

Beck is a young program who becomes the leader of a revolution inside the Grid. His mission is to free, & rescue his home and friends from the reign of the villainous, and explosive Clu and his henchman General Tesler. Beck is trained by Tron, the greatest warrior the Grid has ever come to know. TRON not only teaches Beck the fighting and light cycle skills he needs to challenge this brutal military occupation, but becomes a guide and mentor to him as he grows beyond his youthful, impulsive nature into a courageous, powerful, strong leader. Destined to become the next System Monitor of the system, Beck adopts Tron's persona and becomes the arch-enemy of General Tesler and his oppressive forces.

Beck had worked at Able's garage for most of his life, carrying out his primary function of fixing and modifying vehicles. Then Clu took over, amid rumors of Tron's demise. When Beck's best friend Bodhi was derezzed before his eyes, he decided to take the fight back to the oppressor, and began his revolution by destroying a statue of Clu.

His actions did not go unnoticed. First chased by Clu's forces, and then by Paige, he stole a Light Crawler and tried to return to Argon City unseen. He was noticed, though. A tall, dark figure in a helmet chased after him and subdued him. The mysterious program cuffed Beck and took him to an interrogation room, gradually discovering everything that Beck had done. While the program was talking however, Beck was decoding his handcuffs using a special tool. He broke free and attacked the program but was defeated again with ease. It was then that the program revealed himself to Beck. It was Tron, damaged in battle with Clu.  He needs a replacement, someone strong and determined enough to not give up the fight.  Faced with such enormous responsibility, Beck gives in to uncertainty and turns Tron down.

After Beck got back to the garage, Tesler told the programs of Argon City that they had been volunteered for the games. Several programs had been captured, including Beck's friends, Zed and Mara. Beck followed the Light Rail that was transporting them and jumped onto it with his light cycle. There was one Black Guard patrolling and after a brief fight where the guard's helmet was knocked off, Beck looked into the program's eyes and spared his life. He managed to knock the light rail off it's beam and, with help from the guardsman, Beck located and freed his friends. His accomplice was derezzed only moments later when General Tesler launched a surprise attack of his own. The lengthy fight ended when Tesler fell from a building under construction, allowing Beck the opportunity to escape.

Back with Tron, Beck says that he's ready; he must do this.  The wounded System Monitor splits the white half of his disc off, his white light suit converting to black,, and gives it to Beck who locks it to his own disc.  As Beck replaced his disc on his back, his light suit became Tron's white version. The latter then told Beck, "Come. We have a lot of work to do, Tron."

Beck as an individual possesses a friendly, intelligent, laid-back, easy-going, optimistic & A1 personality. He enjoys hanging out with his friends and playing disc games with them. Beck also has good sense of humor, which becomes more frivolous when disguised as the Renegade; this sometimes puts him at odds with his more serious mentor, Tron. Beck has shown on numerous occasions that he has a noble personality, refusing to take the life of other programs, even if they are part of the occupation; Tron cites this as one of many reasons why he chose Beck as his successor. Beck's belief in the sanctity of other programs' lives persisted even when his memories were lost, and at another time caused him to take great risks in an attempt to prevent Tron from killing Dyson for revenge. Beck also seems to be having deep feelings for his enemy Paige when he goes on a date with her and constantly saves her life.

Beck showed a more sinister, & vile side while under the influence of the power upgrade weapon, laughing maniacally and behaving antagonistically. This side has never been shown since, but (as mentioned below) some programs still remember how he behaved and have began to view him as a monster.

Beck as the Renegade

To disguise himself as the Renegade, Beck wears Tron's white light suit, which is stored on the half-disc Tron lent him.  He keeps the half-disc at home, hidden on the underside of the shelf of his personal locker in Able's garage.  When the half-disc is not available, Beck wears a makeshift black light suit of his own creation, modified from his own light suit, with Tron's "T" symbol on its chest. Both guises come with a helmet to conceal his features, as programs do know what the famous Tron looks like. While acting as the Renegade, Beck lowers his voice and does his best to assume a commanding persona, though the effect falters when he is unsure of himself.

Opinions on the Renegade's identity vary, with some believing he is Tron himself and others believing he is an imposter. Beck generally allows programs to assume what they will, though he does directly claim the alias a couple of times.

A number of General Tesler's attempts to discredit the Renegade have involved characterizing him as a terrorist, malcontent, or other form of evildoer with no care for innocent programs in his path. Gorn twice fabricated apparent memories of the Renegade into the identity discs of her victims -- once to frame Hopper as the Renegade and once to portray the Renegade as underhanded and malevolent. Cyrus also attempted to smear the Renegade's name by betraying and killing innocents while wearing Tron's signature white suit, successfully turning much of Argon City against the Renegade. Beck's confidence and belief in the Renegade's mission was often severely tested by these setbacks. Eventually, public opinion sways in favor of the Renegade.

Due to his time playing disc games with his friends, Beck started his engineering career with a highly developed natural skill at throwing his identity disc; this skill and other combat techniques have been enhanced further through Tron's tutelage. He is proficient in hand-to-hand combat. Despite his default programming as a mechanic, he manages to hold his ground against General Tesler, even injuring him multiple times, despite the latter being a superior program with augmented weapons.

Beck prefers to use his combat abilities to incapacitate his foes, as he dislikes killing. He is also talented in parkour, utilizing it to navigate the environment of Argon and to evade his foes.

As a mechanic, Beck is well versed with the various forms of machinery found throughout the Grid. As a result, he is able to fix and operate just about any machine in the Grid, especially if the technology in question is a vehicle. Beck is seen sabotaging a lightcycle's coding mid-race with no difficulties. He has skillfully operated light jets, recognizers, and light copters. By extension, Beck is a skilled saboteur, frequently sabotaging enemy vehicles and utilizing explosive ordinances. 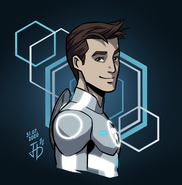 We won't be intimidated! I don't care how strong or p o w e r f u l l! your forces are!

Beck talkin to Able about Bodhi getting derezzed.

Beck generates his versatile baton into his A1, and Visual Light Cycle during his expressway chase

Beck Transforming into his alter-ego the Renegade