The Parody Wiki
Register
Don't have an account?
Sign In
Advertisement
in: Characters, Animals, North American Animals,
and 25 more

The diminutive bee hummingbird (Mellisuga helenae) has the incredible accolade of being the smallest living bird in the world. The male bee hummingbird exhibits extravagant breeding plumage, with iridescent, fiery red-pink feathers on the head and throat, which are elongated around the neck. The rest of the upperparts are bluish-green, and the underside is white-grey, with blue spots on the wing tips and black-tipped tail feathers. The brightly coloured feathers are only apparent before and during the breeding season, and are shed shortly after, when they are replaced by more drab plumage. The female bee hummingbird is slightly larger than the male, with green upperparts and white tips to the tail feathers, and without the iridescent plumage. Beating its wings 80 times per second in a figure-of-eight pattern, the bee hummingbird can hover and move with great agility. During an intricate courtship display, the wing beats of the bee hummingbird rises to around 200 beats a second. The bee hummingbird eats up to half its body mass in food each day, and consumes up to 8 times its body mass in water. 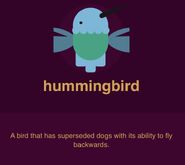