The Parody Wiki
Register
Don't have an account?
Sign In
Advertisement
in: Characters, Animals, African Animals,
and 29 more

The beisa oryx, also known as the East African oryx, (Oryx beisa) has a number of physiological adaptations which allow it to conserve water. Under conditions of extreme heat and low water, the oryx can raise its body temperature to 46.5o C (116o F). Up to this temperature, there is a normal flow of heat from the body to the environment without a loss of water.  Only after this point does it start to perspire.  Herds have a definite hierarchy, with a cow leading the herd and an 'alpha bull' bringing up the rear.  However, if the lead cow strays off the set course, the bull hurries to the front to redirect the march.  When threatened, beisa usually flee, although when cornered they present a spirited defense, sometimes inflicting fatal injuries with their spear-like horns. The East African oryx stands just over a metre at the shoulder and weighs around 175 lb (79 kg). It has a grey coat with a white underside, separated from the grey by a stripe of black, with black stripes where the head attaches to the neck, along the nose, and from the eye to the mouth and on the forehead. The mane is small and chestnut-coloured; the ringed horns are thin and straight. They are found on both sexes and typically measure 75–80 cm (30–31 in). Comparably, the gemsbok has an entirely black tail, a black patch at the base of the tail, and more black on the legs (including a patch on the hindlegs) and lower flanks. The smaller Arabian oryx is overall whiter with largely dark legs. East African oryxes live in semidesert and steppes, where they eat grasses, leaves, fruit and buds. They are able to store water by raising their body temperatures (so as to avoid perspiration). They gather in herds of five to 40 animals, often with females moving at the front and a large male guarding from the rear. Some older males are solitary. Radio tracking studies show the solitary males are often accompanied for brief periods by breeding-condition females, so it is probable they are executing a strategy to maximise their chances of reproduction. 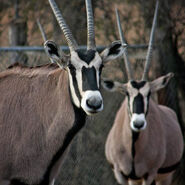