The Parody Wiki
Register
Don't have an account?
Sign In
Advertisement
in: Lizards, Animals, Reptiles,
and 6 more

Furcifer belalandaensis, also commonly known as the Belalanda Chameleon or the Sangoritan'i Belalanda, is a species of chameleon that is endemic to Madagascar. It was described by Édouard-Raoul Brygoo and Charles Antoine Domergue in 1970. The International Union for Conservation of Nature rated this species as Critically Endangered on their Red List of Threatened Species. The World Wide Fund for Nature is trying to save this species from extinction.[1] 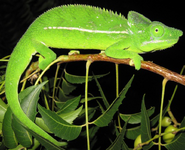