In 1989, Azmuth resigns from S.H.I.E.L.D. after discovering that S.H.I.E.L.D. attempted to duplicate his "Omnitrix"; Pym believes the Omnitrix is dangerous and vows to hide it from the world.

In the present day, several months after the events in Sokovia, master thief Ben Tennyson is released from prison. He rejoins his old cellmate, Kevin Levin, who tries to recruit Ben into his gang, but Tennyson wants to live an honest life. Ben, uninvited, visits his old house, where he finds that his mother is engaged to a cop called Jim Paxton after his father die, . His mother agrees to allow visitation rights if Lang can straighten out his life.

Azmuth pays a visit to his old company, Primus, where the current CEO and Azmuth's former assistent, Albedo, reveals that he is aware that Azmuth was once used the Omnitrix, and hid the secrets of his technology. He goes on to unveil the Ultimatrix, a copy of the Omnitrix that Albedo believes will revolutionize warfare and espionage.

Ben loses his job because of his criminal record, so he reluctantly agrees to go back to crime. Tennyson breaks into Azmuth's house and cracks the safe in the basement, only to find nothing but an old clock which he takes home. He tries to use the clock and accidentally presses a button that turn him into Wildmutt. Terrified by the experience, he returns to the house and replaces it, only to be arrested on his way out. Azmuth meets Ben in jail and smuggles the Omnitrix into Tennyson's cell to help him break out.

Tennyson wakes up in Azmuth's house, where he meets Azmuth's assistent Myaxx, a senior executive at Primus. Despite their rocky relationship, she secretly spies on Albedo for Azmuth. Azmuth reveals that he manipulated Ben into stealing the Omnitrix; he wants Tennyson to become "Ben 10" and steal the Ultimatrix technology from Albedo. Azmuth and Myaxx train Tennyson to fight and to control ants. For his first mission, Ben steals a device from the Avengers' headquarters, where he gets into a scuffle with Cygnus Hyoga. Once Ben returns, Azmuth tells him and Myaxx the truth about the death of his wie: Zennith was once Azmuth's counterpart, and sacrificed herself to disable a Russian nuclear missile, in the process disappearing into the Codon Stream. Azmuth warns Ben that he could suffer a similar fate if he overrides the Omnitrix's safeguards.

In his lab, Albedo manages to safely shrink a lamb, thus perfecting the Ultimatrix. Albedo personally invites Azmuth to attend the official unveiling, meaning Ben must steal the Ultimatrix that night. Tennyson brings his gang in on the job and along with the assistance of a swarm of flying ants, Tennyson infiltrates Primus, sabotages the servers and plants explosives. When he attempts to steal the Ultimatrix suit, he instead is caught in a trap by Albedo, who had anticipated the theft. Albedo, having both the Ultimatrix and Omnitrix, plans to sell the technology to Hydra. Ben manages to break out of the trap and use all his alien to kill the Hydra agents. As Albedo escapes, the explosives go off, destroying Primus.

Angered at the loss of his company, a berserk Albedo dons the Ultimatrix and fights Ben. Ben traps Albedo (in form of Nanomech) in a bug zapper, but is arrested by Paxton before he can destroy the Ultimatrix. Albido holds Ben's mother hostage to lure him. ben shrinks to subatomic size to penetrate the Ultimatrix using Upgrade and sabotage it. Causing albedo's DNA to fall apart, reducing him to nothing. Ben returns to normal after tinkering with the Omnitrix mechanism. In gratitude for Ben's heroism, Paxton covers for Ben to keep him out of prison. Seeing that Ben survived and returned from the quantum realm, Azmuth wonders if his wife is alive too.

In a mid-credits scene, Azmuth shows Myaxx a prototype of a new Omnitrix. In a post-credits scene, Cygnus Hyoga and Pegasus Seiya have Emperor Hades in their custody. After deciding not to inform Phineas, Hyoga states that he knows who to contact. 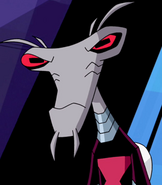 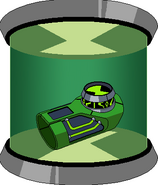 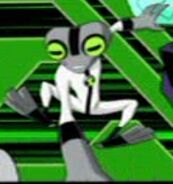 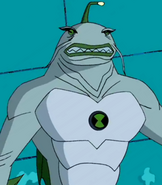 Add a photo to this gallery
Retrieved from "https://parody.fandom.com/wiki/Ben_10_(Ant_Man)?oldid=330328"
Community content is available under CC-BY-SA unless otherwise noted.