Benny, hopping mad as a bellhop at The Furry Arms.

Benny Rabbit is a cranky rabbit who serves as a bellhop for the Furry Arms hotel on Sesame Street. In one skit, Benny had a job working in a car rental place.

Benny is easily irritated and frequently yells at others. His outbursts are preceded by a variation of the comedic "slow-burn," as he grits his two front teeth until a small squeak is emitted. His personality is very similar to Oscar the Grouch, who shares similar character traits.

Benny seldom does anything nice for another person and whenever someone asks him for a favor, he says he has to go downtown. He hates being touched and hugged, but his biggest pet peeve is when people address him as "Bunny" rather than Benny.

Benny was introduced in Sesame Street Episode 2815 (1991) as a generic rabbit character, and was then hired to work for the Furry Arms hotel in 1993. Although briefly retired in 1998, he resurfaced in Season 32. He occasionally performed such songs as "Do the Benny Hop," "14 Carrot Love," and "Don't Touch Me." 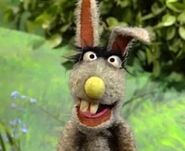 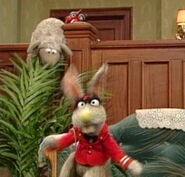 Add a photo to this gallery
Retrieved from "https://parody.fandom.com/wiki/Benny_Rabbit?oldid=1248338"
Community content is available under CC-BY-SA unless otherwise noted.