The Parody Wiki
Register
Don't have an account?
Sign In
Advertisement
in: Anti-Heroes, Male Characters, Regular Show Characters,
and 41 more

Benson is one of the main characters from Regular Show. He is a gumball machine, and was originally known as The Park's manager in the entire series until the series finale, when Mr. Mallard dies. As a manager, he is the boss of every park worker (with the possible exception of Pops). He has a short temper and has a tendency of yelling at Mordecai and Rigby every time they slack off.

Benson is easily the most short-tempered character of all. His short temper is usually contributed by the lack of productivity by Mordecai and Rigby, as they always prefer to slack off and play video games rather than doing their jobs. Benson often threatens to fire Mordecai and Rigby if they don't finish their work or do a simple task such as buying tortillas or going to a Karaoke Bar. Whenever they destroy park property or slack off, Benson loses his temper, turning varying shades of red, and often flips out on Mordecai and Rigby. Aside from this Benson is usually calm and, in fact, is friendly and social, even with Mordecai and Rigby. Whenever Benson is in a good mood, he'll reward his employees with time off, usually in the form of nightly entertainment or dining out.

He is a Spork

He Played as the Waiter in The TailsBob FoxPants Movie

He is a Waiter

He played as Colonel Hathi in The Kingdom Book

He is a commander elephant

He played as Surge Protector in Wreck It Alex

He is a Security Guard

He played as Mr. Ages in The Secret of NIMH (TheFoxPrince11 Style)

He Played As Jeremiah Mercer In Four Teenagers

He Played as Rabbit in The Fun Adventures of Spongebob Squarepants 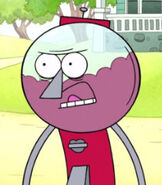 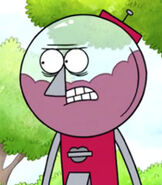 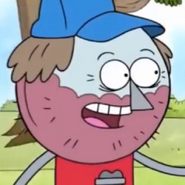