The Bernese Mountain Dog (German: Berner Sennenhund) is a large-sized breed of dog, one of the four breeds of Sennenhund-type dogs from the Swiss Alps. The name Sennenhund is derived from the German Senne ("alpine pasture") and Hund ("dog"), as they accompanied the alpine herders and dairymen called Senn. Berner (or Bernese in English) refers to the area of the breed’s origin, in the canton of Bern. This mountain dog was originally kept as a general farm dog. Large Sennenhunde in the past were also used as draft animals, pulling carts. The breed was officially established in 1907. In 1937, the American Kennel Club recognized it; today, the club classifies it as a member of the Working Group. 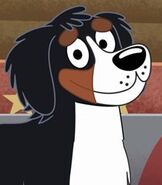