The Parody Wiki
Register
Don't have an account?
Sign In
Advertisement
in: My Little Pony Characters, My Little Pony: Friendship is Magic, Heroes,
and 16 more

Big Macintosh is a male Earth pony, the older brother of Applejack and Apple Bloom, and part of the Apple family. He makes his debut in the first episode, during which he idly walks in Ponyville the moment Twilight Sparkle first arrives. Later, Applejack introduces him during the Apple family reunion, although he has no speaking roles until the fourth episode, Applebuck Season. He is soft-spoken and laconic, and often replies with a simple "eeyup" or "nnope". He is first called by the nickname Big Mac in The Cutie Pox, and in later episodes is called by this nickname more often than by his name, even in the credits. 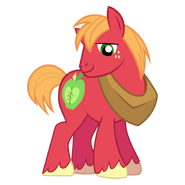