William "Bill" Henry Cosby Jr. is a member of the Junkyard Gang, and Russell's older brother. In the Junkyard Band, he plays the drums (made from a foot-petal trashcan and a metal box) As his name suggests, he is an animated version of the series' creator, Bill Cosby. (although the real Bill Cosby himself is a live-action narrator)

Bill in the movie (cartoon)

Bill in the movie (live-action) 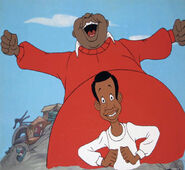 Retrieved from "https://parody.fandom.com/wiki/Bill?oldid=2095020"
Community content is available under CC-BY-SA unless otherwise noted.