Bill Andersen is a supporting character from the Disney/Pixar film Inside Out. He is Riley Andersen's father.

He played Gerald O'Hara in Gone with the Wind (PrinceAnarioandPrincessOrianaRockz Style)

He played Hiram Flaversham in The Great Nerd Detective

He is Aurora's father

He played George in Benjamin Pan

He is Wendy, John and Michael's father

He played Maurice in Beauty and the Blue Dog

He played King William in The Hen Princess

He played Fa Zhou in Orianalan

He played Cinderella's Father in Orianarella

He played Boris Kropotkin in RugKids

He played Tiana's Father in The Princess and the ???

Bill Andersen playing in Ben Kropotkin in Cartoons/Inside Out 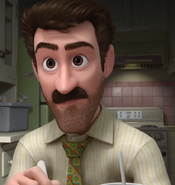 Add a photo to this gallery
Retrieved from "https://parody.fandom.com/wiki/Bill_Andersen?oldid=860693"
Community content is available under CC-BY-SA unless otherwise noted.