The black-billed magpie (Pica hudsonia), also known as the American magpie, is a bird in the corvidae family that inhabits the western half of North America, from Colorado, to southern coastal Alaska, to Central Oregon, to northern California, northern Nevada, northern Arizona, northern New Mexico, central Kansas, and Nebraska. It is black and white, with black areas on the wings and tail showing iridescent hints of blue or blue-green. It is one of only four North American songbirds whose tail makes up half or more of the total body length (the others being the yellow-billed magpie, the scissor-tailed flycatcher, and the fork-tailed flycatcher). This species prefers generally open habitats with clumps of trees. It can therefore be found in farmlands and suburban areas, where it comes into regular contact with people. Where persecuted it becomes very wary, but otherwise it is fairly tolerant of human presence. Historically associated with bison herds, it now lands on the back of cattle to clean ticks and insects from them. Large predators such as wolves are commonly followed by black-billed magpies, who scavenge from their kills. The species also walks on the ground, where it obtains such food items as beetles, grasshoppers, worms, and small rodents. The black-billed magpie is one of the few North American birds that build a domed nest. This nest is made up of twigs and sits near the top of trees. Usually 6–7 eggs are laid. Incubation, by the female only, starts when the clutch is complete, and lasts 16–21 days. The nestling period is 3–4 weeks. 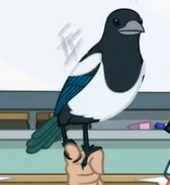