The Parody Wiki
Register
Don't have an account?
Sign In
Advertisement
in: Characters, Animals, North American Animals,
and 37 more

Once classified as Extinct in the Wild, the black-footed ferret (Mustela nigripes) is one of the world's rarest mammals and the only ferret native to North America. This slender animal has a yellowish colored coat, pale underparts, and a dark tail tip and black feet. The muzzle, throat and forehead are white and there is a black mask around the eyes. As with most members of the genus Mustela, the males are larger and much heavier than females. The legs are short and the large front paws are armed with claws for digging. The last remaining 18 black-footed ferrets were taken into captivity between 1985 and 1987 for captive breeding. There are currently at least 2 self-sustaining wild populations of the once Extinct in the Wild black-footed ferret. The black-footed ferret is dependent on prairie dogs both as food and to use their burrows for shelter. 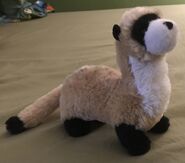