The Parody Wiki
Register
Don't have an account?
Sign In
Advertisement
in: Characters, Animals, North American Animals,
and 8 more

The black-throated magpie-jay (Calocitta colliei) is a strikingly long-tailed magpie-jay of northwestern Mexico. This species is 58.5 to 76.5 cm (23 to 30 inches) long, more than half of which is the tail, and weight is 225-251 grams (8-9 oz.). Only a very few corvids, including the black-billed magpie, the red-billed blue magpie and the closely related white-throated magpie-jay, have a comparable tail length. The upperparts are blue with white tips to the tail feathers; the underparts are white. The bill, legs, head, and conspicuous crest are black except for a pale blue crescent over the eyes and a patch under the eye. In juveniles, the crest has a white tip and the patch below the eye is smaller and darker blue than in adults. In most birds, the throat and chest are also black, but some in the southern part of the range have various amounts of white there. The calls are varied, loud, raucous, sometimes parrot-like. This species occurs in pairs or small groups in woodland, except for humid woodland, and partially open areas on the Pacific Slope of Mexico from southern Sonora south to Jalisco and northwestern Colima, for a total of 160,000 km2. As of 1993 there was some evidence of a population decline. The species has become established in southern San Diego County (2013), especially in the Tijuana River Valley. The birds are presumably descendants of escapees from nearby Tijuana, Baja California, where the trade in birds is unregulated. 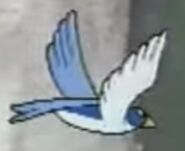