The black eagle (Ictinaetus malaiensis) is a bird of prey. Like all eagles, it is in the family Accipitridae, and is the only member of the genus Ictinaetus. They soar over forests in the hilly regions of tropical Asia and hunt mammals and birds, particularly at their nests. They are easily identified by their widely splayed and long primary "fingers", the characteristic silhouette, slow flight and yellow ceres and legs that contrast with their dark feathers. The black eagle breeds in tropical Asia. Race perniger is found in the Himalayan foothills west through Nepal into northeastern Murree in the forests of the Eastern and Western Ghats in peninsular India and Sri Lanka. The species also extends into the Aravalli range of northwestern India. The nominate race malaiensis is found in Burma, southern China and Taiwan, into the Malay Peninsula. They are generally residents and no migrations have been observed. In a study in southern India, it was found to favour forests with good forest cover and was absent from areas where the cover was less than 50%. 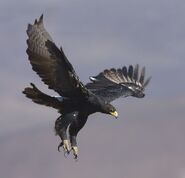