Blaine (Japanese: カツラ Katsura) is the Gym Leader of Cinnabar Island's (later the Seafoam Islands's) Gym, known officially as the Cinnabar Gym. He hands out the Volcano Badge to Trainers who defeat him. He is a highly intelligent man who uses Fire-type Pokémon. 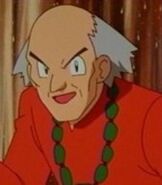 Add a photo to this gallery
Retrieved from "https://parody.fandom.com/wiki/Blaine?oldid=811083"
Community content is available under CC-BY-SA unless otherwise noted.