Start a Wiki
Blake Foster's Adventures of Like Mike is another Blake Foster crossover film created by TheCartoonMan12 and Jimmyandfriends.

Calvin Cambridge is a teenage orphan whose two best friends, Murph and Reg Stevens, are also orphans. At night they have to sell chocolate for a greedy orphanage director, Stan Bittleman, (Crispin Glover) after each home game of the Los Angeles Knights. Calvin meets the team's coach, who is impressed by Calvin's knowledge of basketball and honesty about the chocolates he sells, and offers Calvin tickets for the next game. The next day, Calvin obtains a pair of old sneakers from a Salvation Army Thrift Store that had reportedly been used by a great basketball player when he was a boy. The shoes have the initials MJ written on them, so Calvin thinks they used to belong to Michael Jordan. Calvin's sneakers are taken by a bully named Ox who throws them onto an overhead power line. Calvin tries to retrieve them that night in a rainstorm so he can get them while Ox is not around and gets shocked by a lightning bolt, retrieving the sneakers. Calvin and his friends then attend the basketball game between the Knights and the Minnesota Timberwolves that they had tickets for. The Knights are one of the worst teams in the league. After the second quarter ends, the team's best player, Tracy Reynolds, prepares for a halftime contest. Calvin's ticket number is called and he goes one on one with Tracy. The contest begins and Calvin starts noticing that he has talent; he ends the contest with a dunk after bouncing the ball off the backboard, and leaving the crowd speechless. After a long silence, Murph, Reg and the crowd give Calvin a standing ovation, to which Calvin tells Tracy, "I guess this would be a bad time for me to ask you for your autograph, huh?" Calvin is signed to a one-day contract by the Knights. Calvin prepares for his first game with the Knights, but he realizes that he is not there to play. When the Knights play against the San Antonio Spurs they start losing badly and Coach Wagner decides to let Calvin play in the fourth quarter. Calvin leads a comeback against the Spurs which results in an unexpected win, and in turn leads to him getting a season contract with the Knights. Reynolds becomes his mentor through the NBA's mentoring program, since he is a minor. Calvin brings teamwork to the struggling Knights and makes them one of the best teams in the league. Tracy gradually started to respect Calvin, especially after Calvin gets himself into trouble when making sure that Tracy didn't miss curfew. Meanwhile, Bittleman signs a contract with the team that says that all of Calvin's money will go to him until Calvin is eighteen, or adopted. When the second option is about to become true, Bittleman decides to steal Calvin's shoes and bet US$100,000 against the Knights. After convincing Ox and his friends that Bittleman is selfish, Ox takes the shoes out of Bittleman's safe. The kids head to the arena on electric scooters with Calvin's sneakers to get away from Bittleman. However Bittleman escapes and manages to send several goons after Calvin in a failed attempt to steal the shoes. Calvin makes it to the arena with the shoes after the 3rd quarter ends with Vince Carter and the Toronto Raptors routing the Knights 80–59. In 4th quarter of the last regular season Calvin is reluctantly put into the game by the coach and the Knights start to make a comeback after Tracy convinces the coach not to bench Calvin for tardiness because the team would not be in position to make the playoffs without him. After a pile-on towards the end of the game, Calvin's shoes are ruined with the Knights down by one point. During the following timeout, Calvin tells the team that he will retire after this game. On the last play, Calvin manages to pump fake to get Vince Carter to jump and Calvin was able to get the ball to Tracy after going under Carter who was in mid-air, and Tracy makes the game-winning shot at the buzzer to clinch the Knights their first playoff advance. After going back to his orphanage, Calvin and Murph get adopted by Tracy, and Reg by a different family but they still keep in touch. It is also revealed that Bittleman is missing because he doesn't have enough money to pay the bet, and the orphanage is now sponsored by the Knights 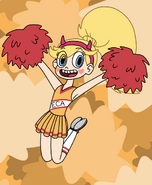 Add a photo to this gallery
Retrieved from "https://parody.fandom.com/wiki/Blake_Foster%27s_Adventures_of_Like_Mike?oldid=1376883"
Community content is available under CC-BY-SA unless otherwise noted.