Bloo is an imaginary friend from Foster's Home for Imaginary Friends.

Bloo played Earthworm in Clarence and the Giant Peach

Bloo played Bug in The Adventures of Thumper in Grouchland

He is a Hamster 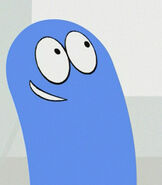 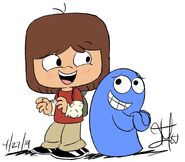 Retrieved from "https://parody.fandom.com/wiki/Bloo?oldid=2656797"
Community content is available under CC-BY-SA unless otherwise noted.