The Parody Wiki
Register
Don't have an account?
Sign In
Advertisement
in: Characters, Animals, South American Animals,
and 63 more

The blue-footed booby (Sula nebouxii) is a large and rather comical-looking seabird, instantly recognisable by its bright blue webbed feet. The head and neck are heavily streaked with brown and white, giving a distinctive ‘spiky’ appearance, while the wings and upperparts are dark brown, with some white barring or scaling on the back, and a large white patch on the upper back and on the rump. The underparts are white, and the tail is dark brown, with white central feathers. The wings are long and pointed. The beak of the blue-footed booby is dark greenish-blue or grey, merging into the dark skin of the face and gular pouch, and the eye is a piercing yellow. The call of the male blue-footed booby is a plaintive whistle, while the female uses a hoarse, grunting ark-ark-ark. The female blue-footed booby is similar in appearance to the male, but can be distinguished by the dark inner iris in the eye, giving the appearance of a larger pupil. The female is also larger than the male, but has a proportionately shorter tail. Immature birds are more uniform brown on the head, neck, upperparts and upper breast, with a white belly, duller legs, and brown or greyish eyes. 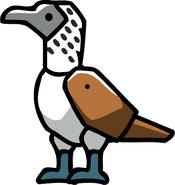 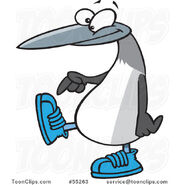 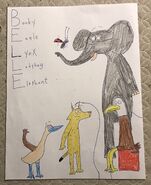 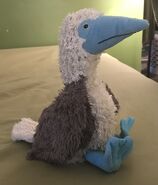 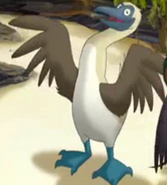 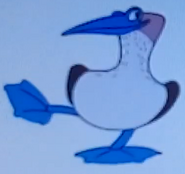 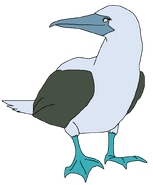 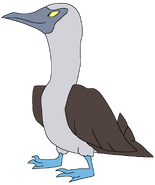