The Parody Wiki
Register
Don't have an account?
Sign In
Advertisement
in: Characters, Animals, Australian Animals,
and 23 more

Regarded by some ornithologists as the loveliest of all birds, the blue bird-of-paradise was discovered by Carl Hunstein in 1884. The scientific name commemorates the ill-fated Crown Prince Rudolf of Austria.

Due to ongoing habitat loss, limited range, small population size and, in some areas, by hunting for its highly prized plumes, the rare blue bird-of-paradise is classified as Vulnerable on the IUCN Red List of Threatened Species. It is listed on Appendix II of CITES. 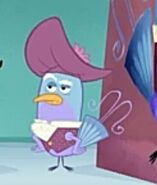