The first African antelope to be hunted to extinction by European settlers, the bluebuck, or blaubok, (Hippotragus leucophaeus) once inhabited the grasslands of South Africa . Slightly smaller than its living relatives the roan antelope (Hippotragus equinus) and the sable antelope (Hippotragus niger), the bluebuck’s most striking feature was the glossy blue appearance of its hide, for which it receives its common nam. This blue colouration was thought by some to be caused by the mix of black and yellow hairs, although unfortunately, museum specimens of the bluebuck do not show this feature. The bluebuck had a relatively small mane; long, white, banded legs; and a strong neck supporting large, curved and profoundly ringed horns. The horns bore 20 to 35 rings and measured up to 60 centimetres in length, with the female’s horns being smaller and thinner. The face was brown with contrasting patches of white in front of the eyes, and both male and female bluebucks were very similar in colouration until reaching sexual maturity, when the males took on a lighter shade. 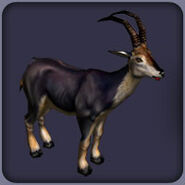 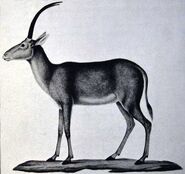